White Hart Lane, in North London, was the home of Tottenham Hotspur FC for 118 years and during that time played host to some of the worlds greatest footballers before it was decided in 2017 that a new 62,000 seater state-of-the-art stadium, the biggest club stadium in London, would be built to replace the existing White Hart Lane ground.

A project of this scale has a wide range of groundwater control requirements and was the perfect opportunity for WJ to take to the pitch and show our expansive range of services! 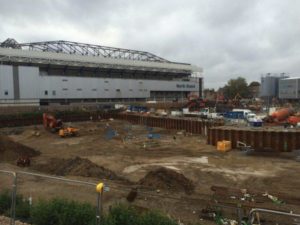 Both of these initial phases focused primarily on dewatering the Kempton Park Gravel deposits to aid the construction of cofferdams which formed part of the new stands and support structures.

The third phase of WJ’s works on site was the installation of a third phase of deepwell dewatering and sump pumping which was installed to help control surface water along the southern side of the works. 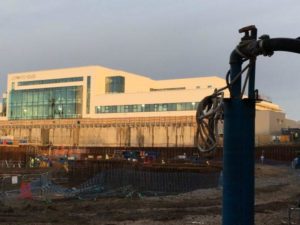 The fourth (and final) phase of dewatering for WJ on this project was the installation of a wellpoint dewatering system to also control the groundwater levels in the Kempton Park Gravels, this time to aid the construction of new pile caps.

WJ’s ability to provide a man of the match performance with our wide range of services for this project was crucial to ensure the successful delivery of one of the most impressive new stadiums in the country – WJ aren’t just about dewatering, but are there for all of your water management requirements!